I had hoped to make it through to the election next month without being told how I should vote as a Christian. Alas, such was not to be. Last Sunday I learned that as a Christian I need to stand against the moral disintegration of the United States by: 1) standing for a constructionist view of the U.S Constitution, 2) standing against the accumulation of debt, against increased taxation and against increased government spending and 3) against abortion. I was told that the fate of our nation and, implicitly of our faith, hangs in the balance. In fact it hangs tenuously by the balance of the U.S. Supreme Court, where four current members do not stand for these three issues. With one more nomination by an ungodly president, the balance could shift and we would descend into a tailspin from which we might never recover (that language is mine, not the message I heard, although the sense was certainly there.) Interestingly, I remember hearing such statements as far back as the presidency of Ronald Reagan.

I am troubled not by the fact that my pastor has his own opinion on these issues, whether I concur with them or not. I think there is room for diverse viewpoints on most political issues. However, I am very troubled that he drew a clear connection between taking particular stands on these issues and standing for one's faith. In fact I was flabbergasted to learn that my view of the U.S. Constitution represents a faith issue. I heard on Sunday the distinct statement that to accept the view that the Constitution is a living document and to allow for its interpretation in light of a modern context is sin. Again, I am not arguing for or against this view of the Constitution, but whichever viewpoint you hold (or whether you hold any at all), I hardly think it qualifies as a matter integral to Christian faith. It troubled me very deeply when my pastor quoted from the U.S. Constitution during worship as if this were some holy, sacred document. It is an amazing document that has served this country well throughout its history and, I hope, will continue to do so for many years to come. But whether it is interpreted in one way or another has nothing to do with God's kingdom. God's kingdom will endure and advance whether we interpret the Constitution in a strict constructionist manner or whether we allow for reinterpretation based on current conditions. This may well make a difference in terms of where our country goes, but where our country goes is not a kingdom-of-God issue. God's kingdom does not depend on the United States. God can and will work through this country whatever it looks like. Try not to fall off your chairs at this, but God can work even without the United States.

I believe that my pastor fell into a typical evangelical error on Sunday. He equated a particular cultural viewpoint with a kingdom-of-God viewpoint. According to this perspective, if we fail to vote in a particular way, our country will lose God's favor (do we enjoy some special favor anyway?) and stray off the path of godliness. I'll let you in on a little secret, we've never really been on the path of godliness. Yes, we've done some good, decent things as a nation. We've also done a lot of incredibly sinful, selfish, destructive things that have certainly caused God to weep. I don't know that this is anymore the case now than it was fifty or a hundred years ago.

Along with our “enlightening” message, we received a voter's guide on Sunday. This voter's guide, although declared to be “non-partisan”, comes from an organization that is non-partisan in a strictly legal sense only. A look at the questions they ask candidates and the issues that affirm, including statements made in the guide concerning citizen-initiated propositions, reveals quite clearly what they support and what they oppose. This organization has every right to push their position, but I really resented having this forced on me in Sunday morning worship and even more being told that this was not an effort to influence my vote, but just a desire to help me be a more-informed voter.

The whole worship service left me with the feeling that, in order to fit into God's family, I must adopt a certain set of political views. If I don't, my godliness is apparently in question. There's no room for diversity, no room for discussion or exploration of the complex context of most political issues. The message and the voter's guide were simplistic, dividing issues into black and white without any possible middle ground. It left us with a false dichotomy. We're either for or against, in or out, standing for righteousness or allowing sin to spread. 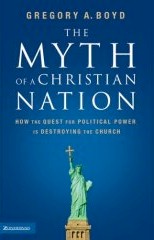 All this struck me as particularly ironic given that I just finished reading Gregory Boyd's book The Myth of a Christian Nation. This book challenged my thinking about the interaction between faith and politics. Boyd argues clearly and strongly that we as Christians err whenever we put our faith in bringing about God's kingdom through the power of the kingdoms of this world. In fact he calls it idolatry. He points to the history of the church to demonstrate that whenever the church has sought and gained political power, it has done far more of a disservice than a service to the Gospel. Most often is has resulted in the name of Christ being defamed rather than exalted. Boyd doesn't tell his readers to disengage from politics. But he does encourage us to recognize that God's work does not depend on whether a particular politician or set of policies gains power. God doesn't work through power-over structures. God works through service, through sacrifice, through counter-cultural movements that transform hearts from within rather than seeking to impose change through laws and legislation. There are times when laws and legislation are appropriate and useful, but ultimately they do not bring about the kingdom of God.

If we're going to talk about political issues from the pulpit, let's talk about issues of real righteousness, like whether we are fostering justice, peace and love. Let's talk about our own lifestyles of greed that directly and indirectly leave most of the world in dire poverty and destroy God's creation. Let's ask whether our behavior demonstrates the love of God more than a desire to protect our personal interests and our American way of life. I love my country, but the kingdom of God is about so much more than defending any particular view of it. In fact the kingdom of God is about far more than the United States at all.

This has been a lengthy post, but Sunday's message left me very troubled. I debated whether to share my thoughts about it, but in light of the applause that arose from much of the congregation after Sunday's message, I felt I need to speak out and offer an alternative viewpoint. Within the worship community on Sunday there was little place for that, although I appreciate one couple who I respect and appreciate, who came up to me afterwards and asked what I thought and how I was feeling. We had a very healthy and open conversation for several minutes, the kind that we need more of in the church. I know the pastor felt very passionately about what he shared and sees these as really crucial issues, but I think his message presented things as far too black and white and false equated certain viewpoints with the kingdom of God.

This blog is for the October synchroblog on faith and politics. Others writing about this include:

Posted by Andrea Victoria at 7:31 PM

Things that Interest Me